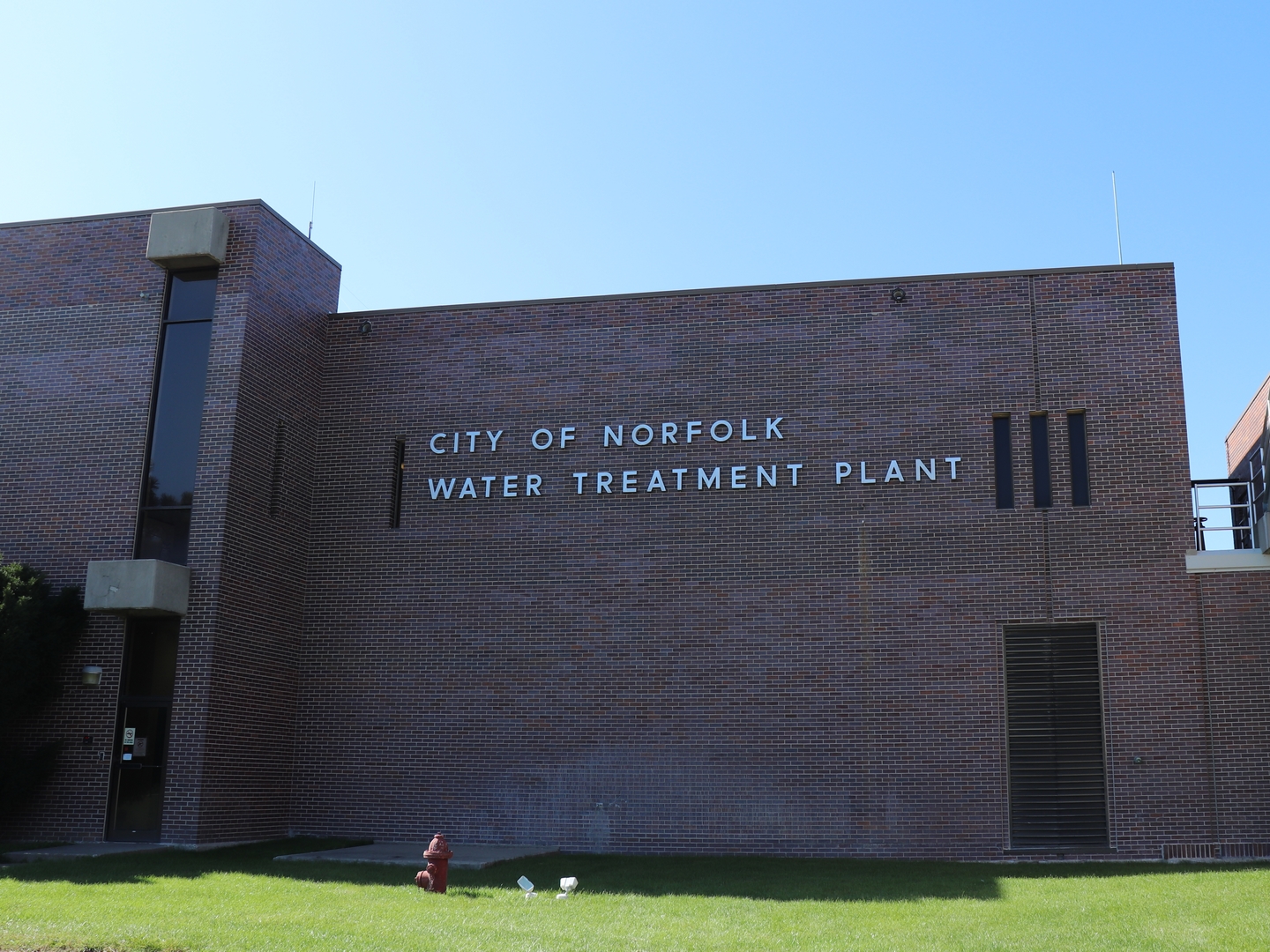 The Environmental Protection Agency (EPA) mandate for the creation of State wellhead protection programs has existed since 1986.  In the summer of 1989, Nebraska submitted its plan for wellhead protection to EPA.  The plan was approved by EPA in June 1991.  Wellhead protection was incorporated into Nebraska 's groundwater standards (Title 118) in September 1991.  Agricultural Chemical Containment Regulations (Title 198, February 1994) and Livestock Waste Regulations (Title 130, July 1995) now include wellhead protection provisions.
The Nebraska WHPP is intended to prevent groundwater pollution which could enter public water supply wells and make them unusable.   Nebraska ’s public water supplies include all systems regularly supplying drinking water to 25 or more people or having 15 or more service connections.  This includes municipal water supplies, rural water districts, and sanitary improvement districts; some self supplied industries and institutions; publicly and privately owned recreation facilities; and restaurants, hotels, service stations and other public accommodations.  About 60 percent of Nebraska ’s population uses a public water supply as a primary drinking water source.

The groundwater pollution addressed by the WHPP includes all human-caused contamination which is potentially harmful to human health.  The basic approach of Nebraska ’s WHPP is minimization of potentially polluting activities on the land around public water supply wells. The land which will be protected is known as a Wellhead Protection Area (WHPA).

At any given time, about 10 percent of Nebraska ’s public water suppliers must deal with the problem of one or more human-caused contaminants in one or more of their wells. Most are eventually able to drill new, safe wells. To continue delivering drinkable water, some suppliers have had to provide bottled water, or even shut down one or more of their wells. In several towns, local businesses have been severely hurt by costly cleanups of hazardous pollutants. All of these situations are costly and disruptive. The problem of groundwater contaminants in public water supplies seems unending. New problems are discovered about as rapidly as existing problems are remedied.

It is clear that prevention of new groundwater contamination is the only means by which the gradually increasing drain on the public resources caused by this contamination can ever be reduced. This realization has spread both nationally and internationally for the same reasons as in Nebraska . The amendments to the Safe Drinking Water Act passed by congress in 1986 require individual states to develop preventive measures to protect public water supply wells from human-caused groundwater contamination.

Wellhead protection activities will center on WHPAs, which are drawn on maps as ground surface areas.  However, WHPAs are three-dimensional, including portions of the groundwater aquifer, the unsaturated soil above the water table, and any surface water passing near the public water supply well.  The WHPA includes the portion of each of these media through which human-caused contamination could be reasonably expected to be drawn into the public water supply well within the planned lifetime of the well.  For map drawing, this lifetime is assumed to be 20 years.  WHPA boundaries follow section lines or other visible landscape features around the outside of the 20-year time-of-travel thresholds.

On the state level, the Nebraska Wellhead Protection program is administered by the Nebraska Department of Environmental Quality (NDEQ) with major assistance from Nebraska Health and Human Services (NHHS). These agencies are carrying out activities 1-4 listed above. Public water suppliers will play a large role in wellhead protection, starting with their choice of a local wellhead protection option. No state authority exists with regard to most of the actions (Activities 5-11) which would be necessary to prevent groundwater contamination from affecting public water supply wells. Therefore, such actions will probably have to be taken by local governments as they are needed.

For technical help with wellhead protection, public water suppliers can turn to NDEQ, NHHS, the Nebraska Rural Water Association, and several other institutions. These include the State Fire Marshal's office, the University of Nebraska-Lincoln (UN-L) Geology and Engineering departments, the Conservation and Survey Division of UN-L, the UN-L Water Center , Cooperative Extension, the United States Geological Survey, the Agricultural Research Service, the Natural Resources Conservation Service, the Natural Resources Districts, and the National Water Well Association.

The following map shows the WHPA for Norfolk ’s West Well Field.  It was drawn originally by the Nebraska Department of Environmental Quality in 2001.  The delineation takes into account such factors as well pumping history, geologic logs and local hydrogeology of the area, based on available data that was collected from irrigation, domestic and public supply wells.

The Nebraska Department of Environmental Quality WhAEM Computer model was used to generate and delineate the map limits.  The model was run in April 2005, and included all of the current pumps and pumping rate data for the City’s West Well Field as of that date.  A protection threshold was established using the 20-year time-of-travel (TOT) radius, which is the estimated distance from which groundwater contaminants could be drawn into the given PWS well(s) if present well pumping rates were continued for 20 years. Also included are TOT radii at 10 years, 2 years, 1.5 years, 1 year, and 180 days.  These TOT thresholds are useful in calculating the amount of time it would take pollution to reach a public water supply well and contaminate the drinking water supply if a surface spill would occur in the WHPA. 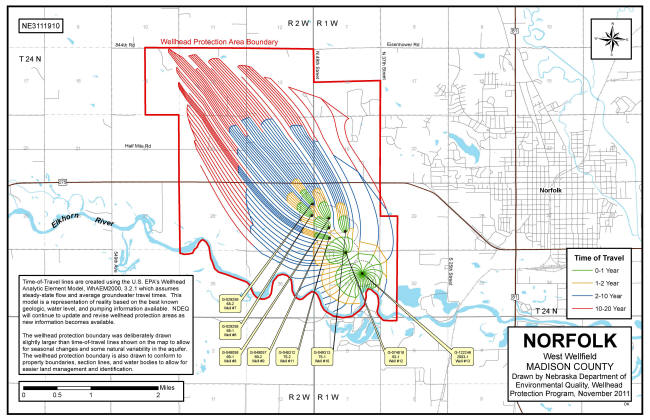 This section includes maps that show the sites of potential contaminant sources within the WHPA. Sites are labeled with the prefix “HW-“ in reference to the last names of the people who conducted the initial inventory (Halsey & Wilkinson).  There are a total of 205 sites within the entire WHPA for Norfolk’s West Well Field.

Information was also gained from the NDEQ list of National Pollutant Discharge Elimination System (NPDES) Permits, Nebraska Department of Natural Resources, and property records.  These are included in Appendix E.

The WHPA, described in Section 1 of this report, stretches over more than 12 square miles.  There are 185 residential sites; each of which is estimated to have one domestic well.  In addition to domestic wells, there are wells at 20 commercial sites, 29 monitoring wells and approximately 20 irrigation wells.  Because wells can act as potential conduits for contaminants into the groundwater, the need for awareness and proper management of these wells is crucial to the quality of Norfolk’s public water supply.

A property owner list is included in Appendix G, and is organized by land Section. 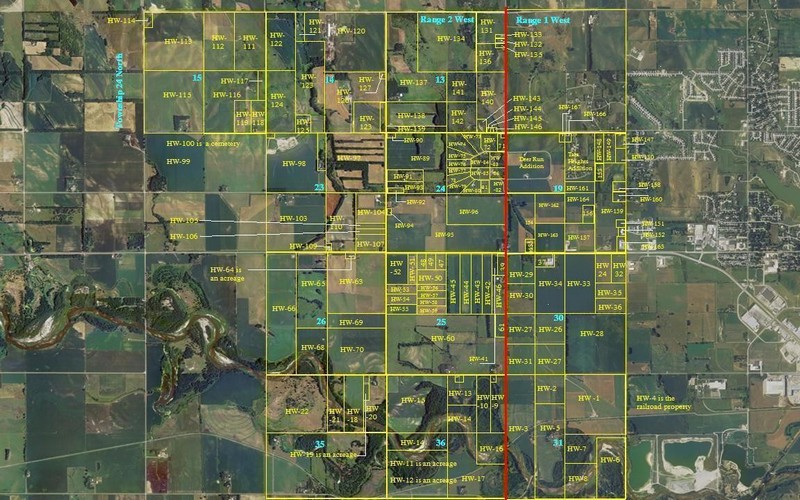 Management activities can be adopted and implemented in the WHPA by the community to protect the city’s drinking water supply.  The following activities have be implemented or initiated to manage the WHPA.

Ordinances and Zoning
The City adopted the following controls to manage the WHPA.

Proof of Meetings
Documentation for the following meetings is attached:

The Water Division’s portion of the Local Emergency Operating Plan (LEOP) is included in Appendix A. The City has also compiled detailed emergency response protocols in the Emergency Response Plan found in Appendix D of this Plan.  These documents line out response and reporting procedures for a number of possible emergency situations.

In the event of a suspected contamination, the Operator would notify the Water Director, and together they would access the area of the contamination and isolate any suspect areas.  After the areas are isolated, the Director would report the event to the Public Works Director, State of Nebraska Heath and Humane Services and the news media.  The area of contamination would be tested for pH, chlorine residual, hardness, and coliforms.  If further tests would be needed, the City would receive sample kits from the State lab.  During this time bottle water and water tankers would be on site at the area churches and schools for public uses. The City of Norfolk has agreements with:

After the area of contamination is flushed, sampled, and determined to be safe, it will be returned to service.  If the contamination can not be flushed out, further corrective actions would be taken to insure the safety of the system.

The Norfolk Water Division will continue updating its system with the latest water treatment and quality monitoring technology to insure the highest quality waster possible for the citizens of Norfolk .

Through its Water Master Plan, the City of Norfolk continues to update its water production capabilities, reserve capacity, and anticipated demand for water.

Management activities adopted in the WHPA by the City of Norfolk will be implemented by several entities to protect the city’s drinking water supply through education of the residents.  Madison County and the City of Norfolk will implement this Plan through zoning overlays in their respective jurisdictions.  Lower Elkhorn NRD will be an active participant through their many programs for managing water resources.

We will acquire wellhead protection signs place around the WHPA.  These signs will be placed on the perimeters of the WHPA and will inform the public that they are entering a WHPA.  The City has held wellhead protection public meetings to discuss the program, and will participate in the Groundwater Festival held annually in Norfolk .

The City web site www.norfolkne.gov includes a Stormwater Management page that will be expanded to include Wellhead Protection.  This page will become a Water Resources page that will encompass proper water quality stewardship practices that impact both surface water and groundwater.

The City will coordinate and work with the Lower Elkhorn NRD to close all abandoned wells as identified in the contaminant source inventory.  Cost share is available, with the NRD paying 75 percent of the abandoned well closure cost and Nebraska Environmental Partnerships paying the other 25 percent.

The entire WHPA for Norfolk is included in the NRD’s Groundwater Management Area.  The NRD requires a permit before new wells are drilled within the District.

Meet with eligible rural landowners within the WHPA and encourage them to enroll in the Natural Resources Conservation Service Conservation Reserve Program (CRP).

Adopt City ordinances and zoning provisions applicable to the WHPA such as:

The following brochures and publications provide information on the services, projects, and associations involved in wellhead protection/water quality issues.